Bruce here, writing on behalf of the Pittsburgh Robisons.  Certainly the story of this past year 2020 will be one people everywhere will be talking about for a long time: the year of the global pandemic, the year of a fierce and polarizing presidential election, the year of social unrest--and the year (O tempora! O mores!) when the Designated Hitter abomination wormed its way (we pray only temporarily) into the National League!

With all of that--a word of affection and good cheer to you from us--Bruce, Susy, Daniel, and Linnea Robison (here in a photo taken back in ancient days, when you could go out to dinner at the William Penn and then take a snapshot in front of the tree in the Palm Court,  Christmas, 2019!)--and with prayers that this New Year 2021 will be one that will go down in the History books in contrast as a season of recovery and renewal in every healthful way . . . . 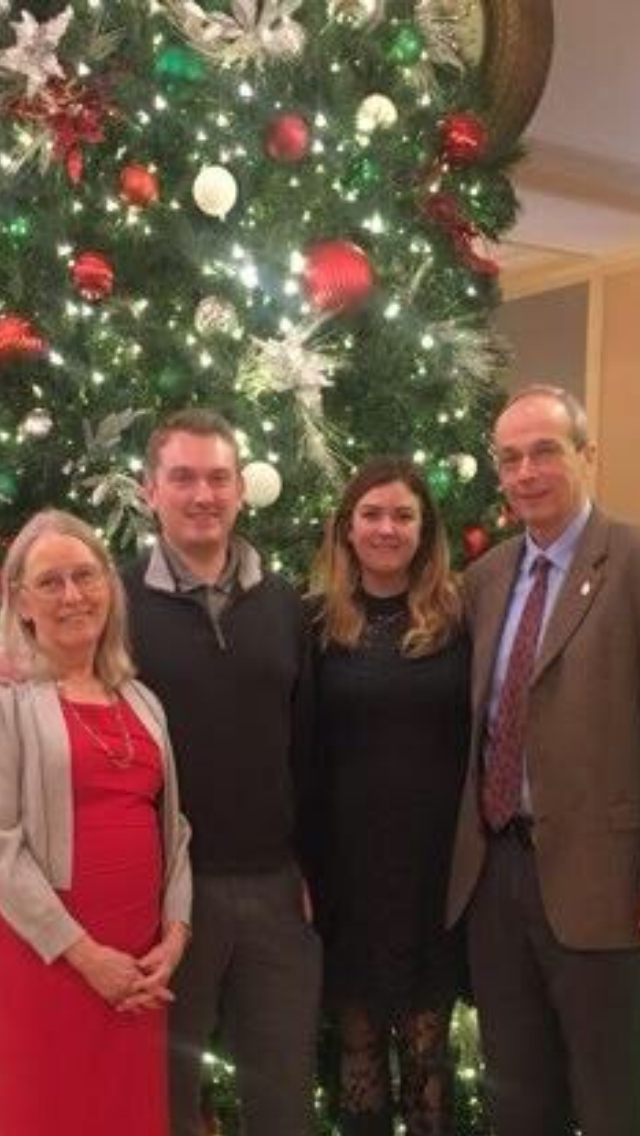 In the meantime, just a quick update on what the Robisons been up to in this year-like-none-other . . . .

Here we are on Valentine's Day, 2020, exiting one of our favorite Thai places over in the Squirrel Hill neighborhood . 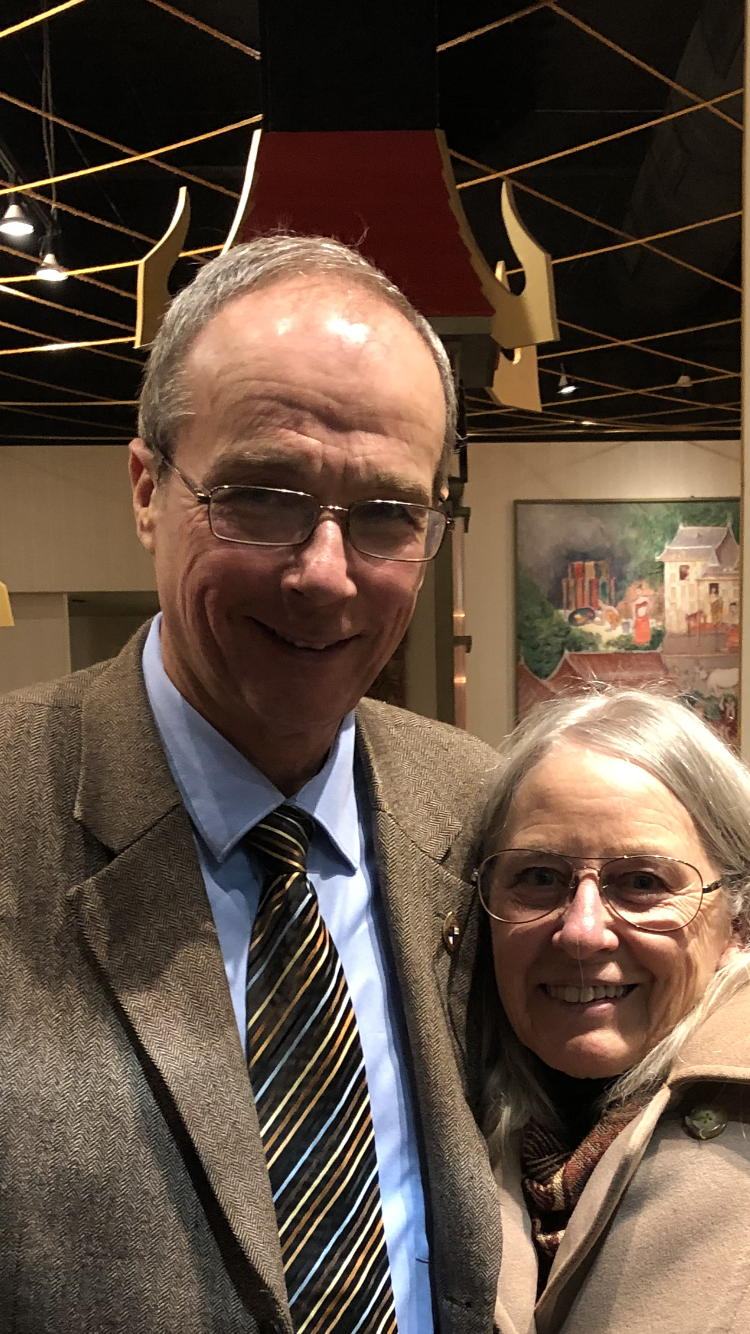 ​  . . . and of course with no idea that "going to a restaurant" would soon seem like an exotic and high-risk activity!

​For me 2020 was Year #1 of retirement from full-time parish ministry, though the next chapter of "ministry in retirement" was happening almost before Guy Lombardo and his Royal Canadians had played the last notes of Auld Lang Syne.

​Beginning in January 2020 I began to serve the congregation of All Saints Church in the Brighton Heights neighborhood of Pittsburgh as a Sunday Supply Priest and volunteer Pastor, and that service was then made somewhat more substantial in August when Bishop McConnell appointed me to serve as part-time Vicar.   Ministry in this Time of Covid has had its challenges, to be sure, with a steep learning curve about the possibilities and limitations of Facebook, YouTube, and Zoom, but "all the saints at All Saints" are a great group of people, and I am really looking forward to much continuing good work together with them as the world around us begins to return to some semblance of normalcy in 2021.
Among my special challenges of 2020 was a lower back injury--herniated disc--in early January, and with several quite painful relapses (mostly due to ill-advised attempts to move furniture or train for a future marathon while still in early recovery) in spring and then again in the fall.  (I'm taking it easier now, trying to keep up my cardio on the elliptical in the garage instead of pounding out miles in the park, and I've taken a solemn oath not to try to move air conditioners from one room to another without assistance--so we're hoping for some improvement in the New Year.)  Other 2020 highlights included "clerk of the works" service as we replaced the deteriorating original windows in our older (1937) Pittsburgh house, had the place painted, and got a bit of a start on some landscaping projects.  Much more to do, but it was nice to have the time to get things rolling this year . . . .

​Also a sadness, after several years of failing health, my mom Mary died in May at her long-time care residence in California.   I was very thankful to have had the opportunity to speak and pray with her during those last days by telephone--and especially then also thankful that my sister Anne and her family, on the scene, were able to visit her and to attend to things after.  While travel restrictions kept us all from being able to gather together to remember and honor her in person, there were and continue to be lots of chances to do that by phone, e-mail, Facebook, etc., especially as Anne was able to find a treasure trove of old family photos.  We think this of our mom and dad (in the Terrace Room of the Statler Hotel in downtown L.A.) was probably around 1952--the year the hotel opened and just a year or so before I arrived on the scene . . . . 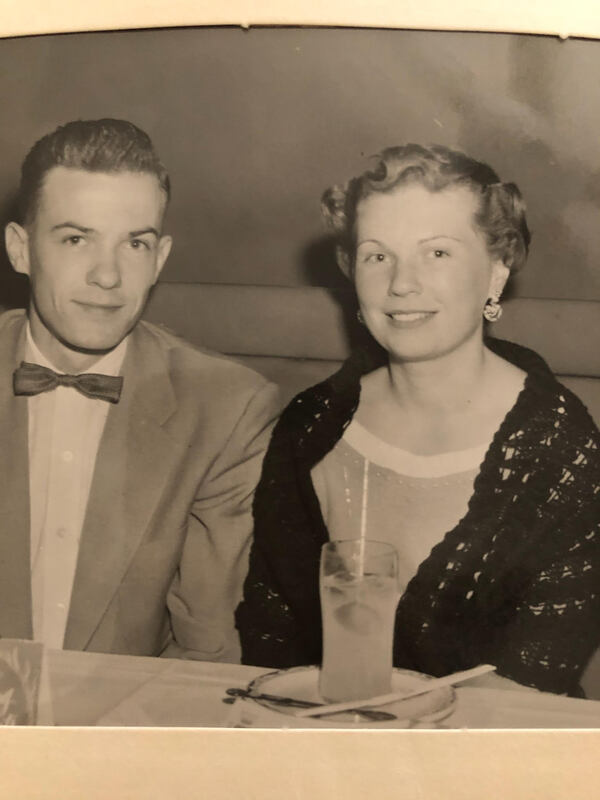 Moving along: Friends will remember that when Susy retired at the end of May, 2019, she headed off to the old family house in the South Shore Massachusetts town of Scituate for a time of "Summertime R. & R." and to begin work on her novel--which was to be the first major creative project of "the next chapter" of her life.  I'm delighted to report that the project is roaring along.  First draft complete, now in the process of editing and review: an exciting adventure story of a teenaged American girl in India, 1952.  The story incorporates many of Susy's wonderful childhood memories of life in India, but with a contemporary edge--and I especially am hoping that in our Christmas Letter for 2021 we'll be announcing a multi-million dollar movie deal!

A persistent thumb injury, alas, has kept Susy from making as much progress as she had hoped with her other big retirement project--learning to play the banjo--but we're hoping that will come too, in time.   She's also been doing a lot of creative cooking, with a special focus on our regular Sunday evening al fresco dinners with Dan and Linnea--and since daughter Linnea lives nearby and has a long workday, Susy has enjoyed a special role as official lunch hour Dog Walker for our "grand-dog" Roo . . . . 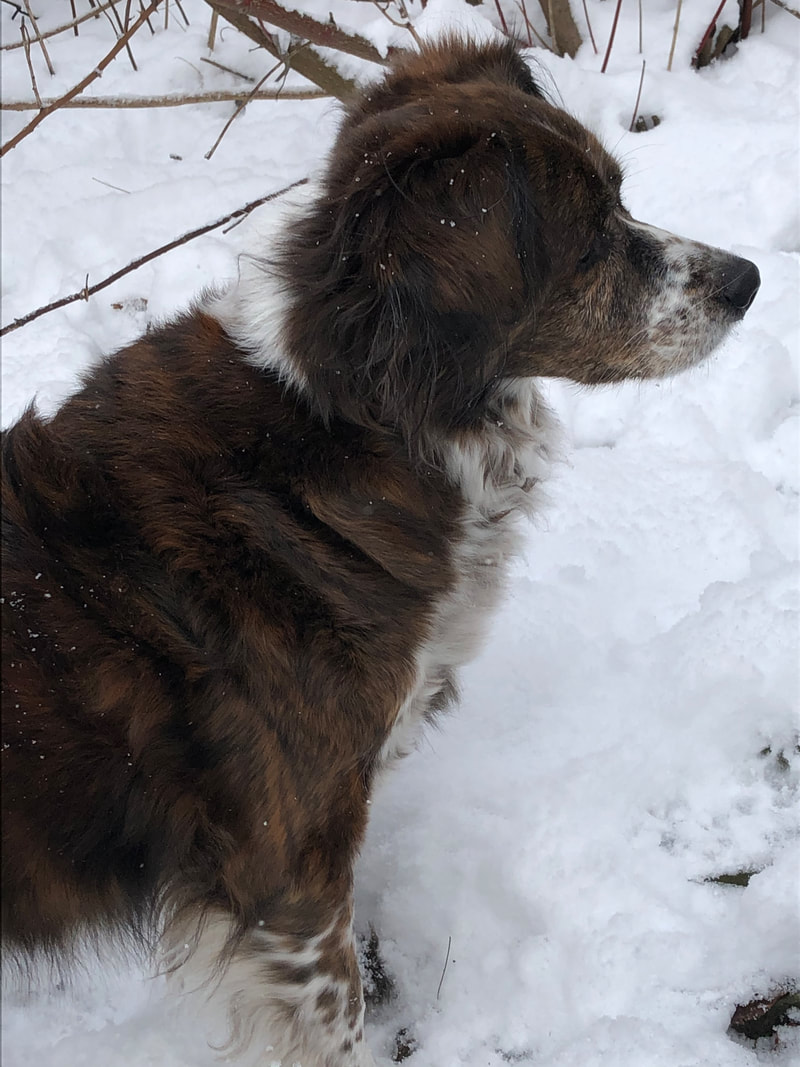 . . . and as gymnastics instructor for the new "Grandkitten" Maizie!
And we would want to mention as well Susy's most recent newfound passion--the Robison Bird and Wildlife Center!
As for the "kids" . . .  both of them moved this year, though Mom and Dad were relieved that they stayed local.   Daniel remained in the general North Hills area but traded apartment-style living for a  downstairs unit in a duplex owned by a friend and colleague of his in the West View community -- not far from Baierl Subaru, where he's been working in new and used car sales and leasing for three years now. 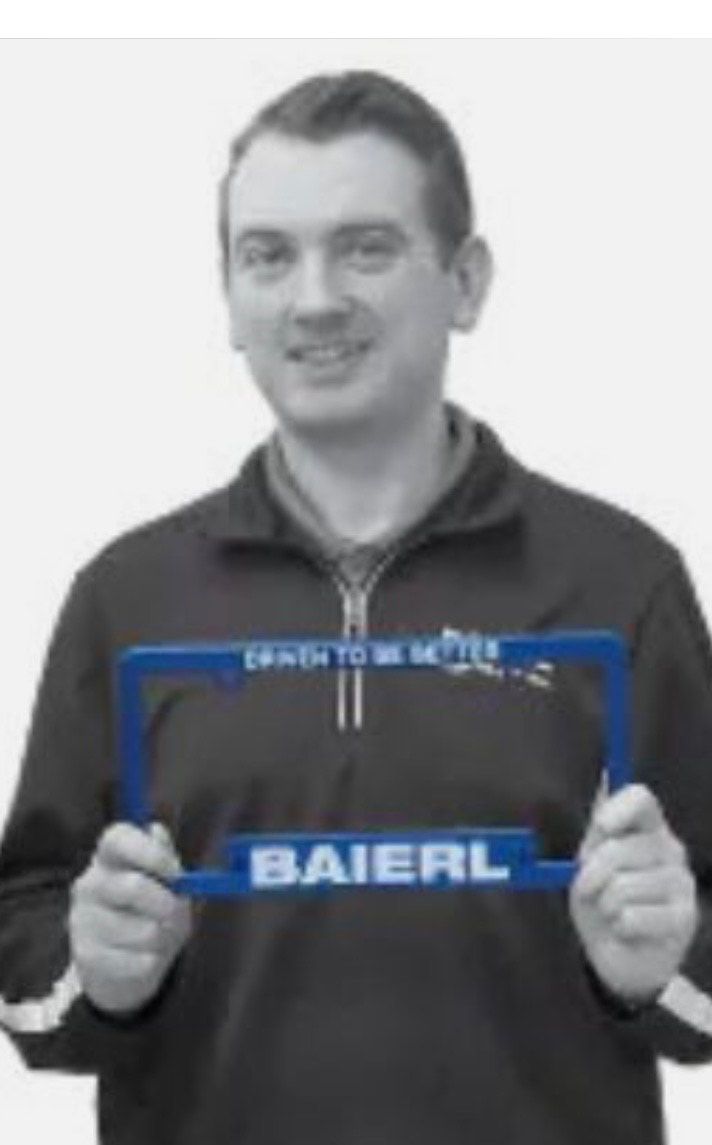 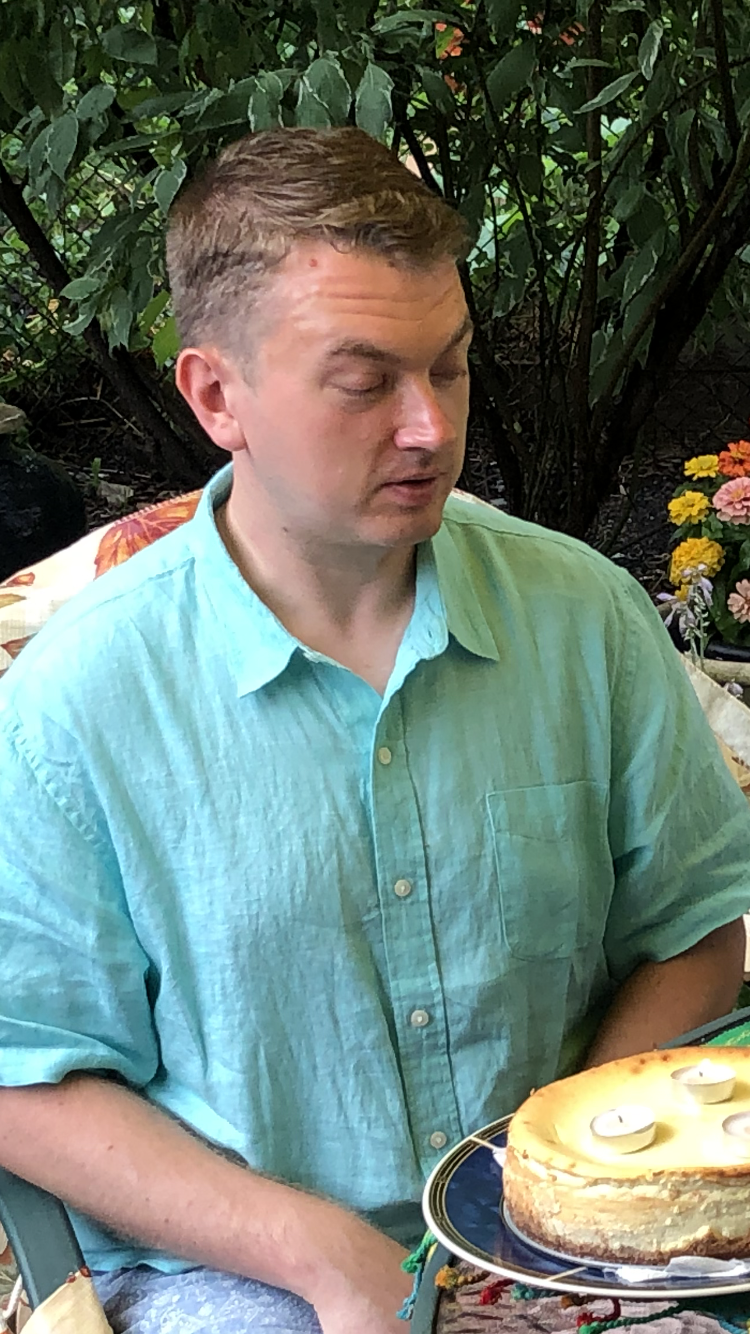 So far at least Dan is the only member of our scatter to have been affected directly by the Covid pandemic.  When Governor Wolf "locked-down" many Pennsylvania businesses last March, auto dealerships were included on his list--and that kept Dan at home with only a little bit of internet-generated business in April and May.  Then later this year he had an exposure probably from a colleague at work, tested positive, and needed to stay at home again for a 14-day quarantine.  Fortunately, his symptoms were mild, and he was back in the saddle again very quickly.

A major highlight of 2020 for Dan was a return to an interest and activity from many years ago, as he spent the spring and fall working on his certification and license with SkyDive Pennsylvania.  (Personally I find even the idea of leaping out of an airplane and falling two or three miles back to earth a little anxiety-producing, but there you go . . . .) 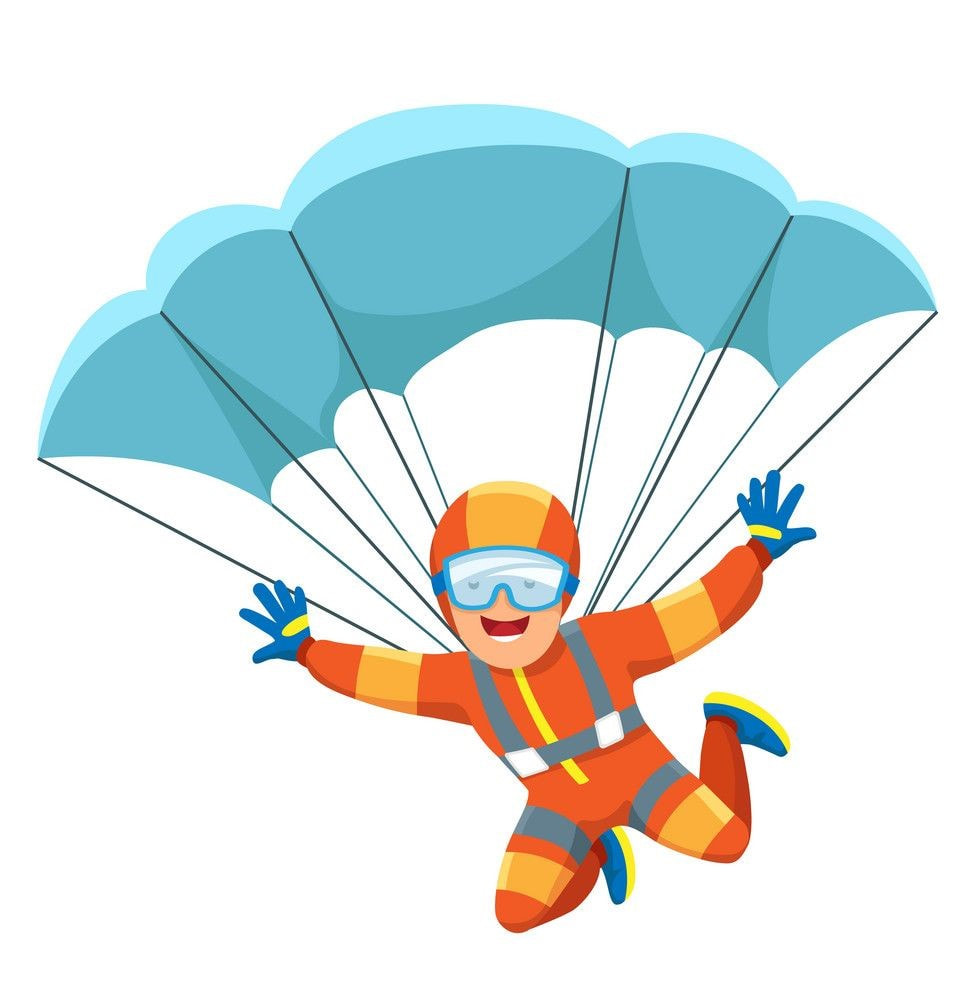 Meanwhile Linnea swapped her trendy Bakery Square apartment in the East Liberty neighborhood for a great little townhouse just seven blocks from the folks in Highland Park--a place right near the Park actually, where she has a front porch and some green space for dog (and cat?) walking, but still only a hop and a skip to the Banfield Pet Clinic on Penn Avenue, where she does her veterinarian thing. 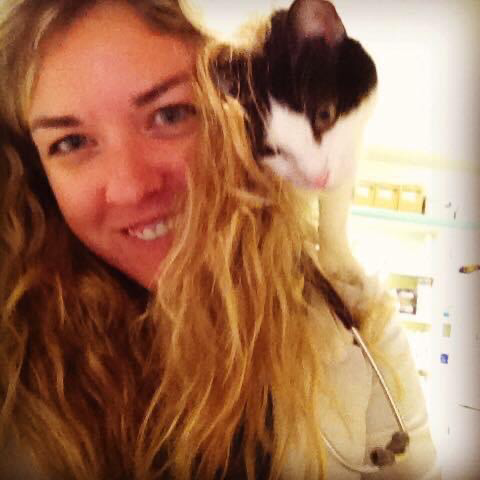 Linnea was the only one of the Robisons to make it out of town this year, as she and a pal zipped down to Cancun for a long beach weekend and the "destination wedding" of a friend from her Florida days just before the first of the major spring Covid-related travel advisories went into effect. 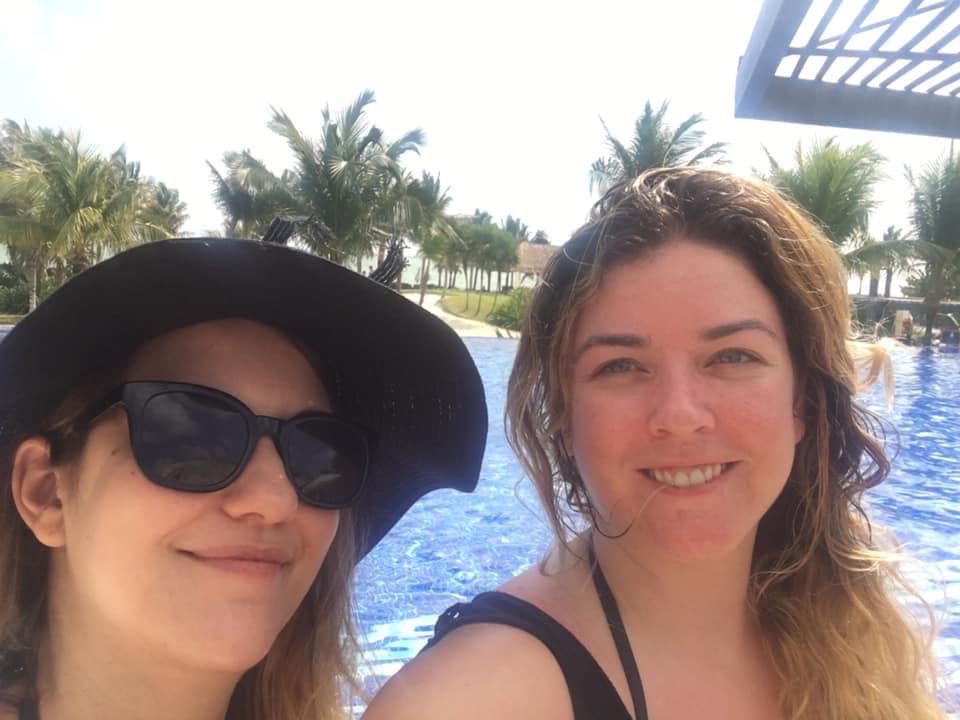 And as our tradition requires, Linnea and Susy once again this year were responsible for selecting, harvesting, and decorating the family Christmas Trees.  Here they are in front of the one in Linnea's new place -- 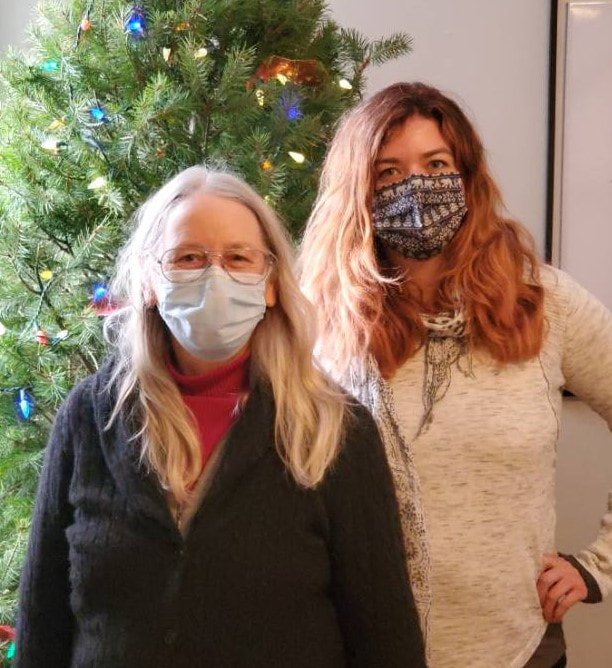 And so finally, here at the end of Christmastide and tiptoeing cautiously into the New Year, simply to say a word of gratitude for our family and friends.  Blessings and joy!  (And please, stay in touch!)